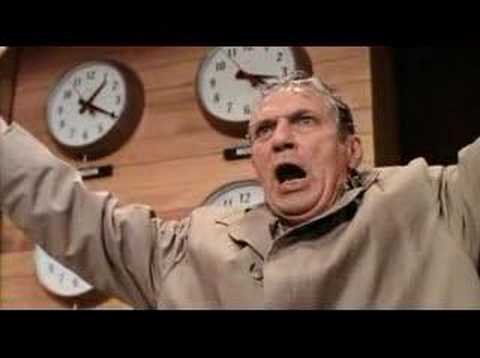 Now with added blasts of inchoate rage from the day after.

“I’m mad as hell and I’m not going to take this anymore.”

But to those who know the movie well there’s a more poignant line spoken by Max Schumacher (William Holden) to the Faye Dunaway character Diane Christensen near the end of the film.

“There’s nothing left in you I can live with.”

At least the Beale character has some anger to energize him, some residual sense that there are things to rail against, but for Max there’s just isn’t anything left to cling to anymore.

The feeling that he thought was love, or fascination at least, has gone.

On an entirely unrelated note the Vancouver Whitecaps threw away two valuable home points to the New York Red Bulls on Saturday afternoon at BC Place.

Vancouver were outplayed for almost the entire game as New York resorted to the kind of “pass and move” attacking play the Whitecaps eschew for reasons best known to themselves.

It takes a lot (and I really do mean “a lot”) for Carl Robinson to make a change at half time for anything other than one of his players losing a leg but Efrain Juarez somehow managed to achieve that somewhat remarkable feat.

He was always a step behind the game both in terms of positioning and passing and he’s now getting close to becoming the Whitecaps worst ever MLS signing in terms of on field performance relating to off field expenditure.

For this game he could offer the excuse he had been out of action for some time due to suspension but that would only beg the question as to why he was starting in the first place.

The “no real consequences for your actions” policy continues to run unchecked in this team it seems and those who were left out of the starting eleven to accommodate the Mexican (David Norman jr for example) must sometimes despair.

Amazingly however the Whitecaps went in to the half time break with the scores tied at 1-1 and even more amazingly they then took the lead in the second half.

Both of those goals came from Kendall Waston out-climbing the returning Tim Parker from corner kicks and it’s hard not to think there was an added motivation for the Costa Rican in playing against his erstwhile defensive companion.

The Whitecaps created virtually nothing of any value from open play all game and yet those two set-pieces had given them a glimpse of the three points they so desperately needed.

Alphonso Davies drew a second yellow card from Micheal Murillo and the Whitecaps were suddenly faced with their nightmare scenario; playing against ten men.

It’s not hard to know why they struggle in this situation.

A team with a man advantage are supposed to control the game, keep possession and tire out the opposition with a series of simple passes.

And the Whitecaps are specifically built to do none of those things.

Perhaps the greatest trick that Robinson (and the club as a whole) has pulled during his tenure is to instill the belief into so many people that there’s no other option to the style of play he favours given the limited spending on salary.

Yet the Red Bulls spend less than Vancouver and currently sit atop the Supporter’s Shield standings while simultaneously playing a style of soccer that makes the Whitecaps efforts seem positively Neanderthal (that’s grossly unfair on the Neanderthals of course given that recent discoveries have uncovered convincing evidence they were capable of both language and creating sophisticated art. But what are they going to do? Sue me?)

Anyway, we’re left with the usual “happy to get a point against a good team” post game schtick that I’m not sure even the coach is really buying into anymore.

And, sure enough, they allowed the Red Bulls to pressure them into giving away a needless free-kick near the edge of the area and the inevitable equalizer ensued.

What should have been a smash and grab three points turned into yet another example of why this team fails when it really matters.

It’s not fundamentally wrong to rely on dead ball situations to score some of your goals but it is fundamentally flawed if that is the only way you can score goals when playing against a team of some quality.

It’s sadly instructive to watch Carl Robinson and observe that the only time he gets out of his seat to do any genuine in game coaching is to shout instructions on where his players should be positioned for defensive set-pieces.

Stick to what you know I guess but the team need so much more than that low level of input and expertise.

After the game Robinson was perplexed at the number of individual errors that crop up week after week.

But so many individual errors point to an overall systemic failure rather than the vagaries of happenstance.

Kendall Waston is the kind of captain who leads by example but he doesn’t seem to be one who can corral a team into concentration. Or organize them on the fly when the opposition throw a curveball.

Somewhat ironically the one player who looked capable of being that guy at the start of the season was the aforementioned Juarez.

But that ship has well and truly sailed.

There’s a lot of talk about individual “Soccer IQ” these days in relation to the decisions players make when on the ball (and whether such a thing exists at all is a topic for another time) but more important than that is having somebody (anybody) who can think on their feet when a game situation changes.

The Whitecaps have nobody who can do that right now.

The season isn’t quite over yet but this game felt like the one in which most people at BC Place finally excepted that, if they were being honest with themselves, it really was.

So perhaps we can turn back to Howard Beale for the most accurate summary of the game and perhaps the whole of this season?

“This is not a psychotic breakdown; it’s a cleansing moment of clarity.”