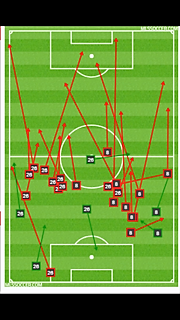 Of all the stats that now bounce around soccer as chaotically as a ball at a Whitecaps training session there is perhaps none to have undergone such a change of perception as that of “possession”.

In the heyday of the peak Tiki Taka period of Barcelona and Spain high possession percentages were presented with all the reverence of a Springsteen cover band tentatively striking the opening chords of Born to Run.

Then over time the pendulum swung towards the Mourinhoesque view that possession, if not inherently dangerous, did at least offer more opportunities to those teams without the ball than those with.

Nowadays those possession stats have become so ubiquitous they just seem to serve the purpose of whoever is opining about whichever game. Team won with low possession stats? Possession doesn’t mean anything. Team won while dominating possession? The numbers don’t lie.

Under Carl Robinson the Vancouver Whitecaps have almost always edged toward the negative side of the ledger when it comes to being in control of the ball but a few recent games (And in particular the recent 2-2 tie in Minnesota) have taken those deficits to a fairly astonishing level.

Against the expansion team Vancouver managed to retain the ball for only 26% of the time and remarkably there wasn’t a single five-minute period in the whole game in which they out-possessed Minnesota.

The chart at the head of this piece is the passing map of the two central defenders on the day, Tim Parker and Andrew Jacobson.

Parker managed to compile a somewhat remarkable 26.7% pass completion rate while Jacobson exceeded even that figure with a law of averages defying 16.7%.

And, as you can see, they just about managed to complete one succesful pass into the opposition half.

Not that it wasn’t for the want of trying though as they each launched a number of high balls forward to the rather small Fredy Montero and the ill-equipped for the role Brek Shea.

Hard to say why that tactic didn’t work, but might it be because Montero is rather small and Shea is ill-equipped for the role?

If it was Carl Robinson’s plan to make use of this kind of distribution then it clearly failed miserably.

But maybe that wasn’t the plan (Let’s really hope it wasn’t the plan) and it was ultimately the circumstances on the day which lured Parker and Jacobson into personifying the definition of hope over experience?

After all, the options open to them were limited.

Not since Pedro Morales departed have the Whitecaps had a player who could comfortably drop back and pick the ball up from the back four in the hope of launching a legitimate attack.

Christian Bolaños can fill the role but he is currently injured and even if he were fit forcing him into that position removes him from the wide areas where he is at his most dangerous.

So Jacobson and Parker were left with Laba and Tchani as their main outlet.

Laba picked the ball up deep seven times and on six of those occasions (Six!) he gave the ball away.

Tchani picked the ball up just once from either of the central defenders during the entire game (In fairness to Tchani his passing accuracy was off the scale compared to almost all other members of the team) but he clearly wasn’t tasked or asked to be the conduit between the defence and the midfield.

So what about the fullbacks?

Well, Tim Parker successfully passed the ball to Jordan Harvey once and er…that’s it.

Throw into the mix the fact that David Ousted distributed the ball twelve times and only on three of those occasions was it within his own half and either by accident or design the Whitecaps became a team simply lumping long balls forward to two players who don’t like to play in that kind of way.

I could probably add the overall lack of team movement (Which also seems to be a feature of Robinson’s coaching style) as yet another factor to throw into the mix explaining the inability to keep the ball because a Whitecaps player in possession rarely has the option of more than one teammate to pick out, thus making it so much easier for the opponent to press and close them down.

Lots of reasons then as to why Vancouver failed to keep hold of the damned thing on Saturday, but not so many answers as to how or if the coaching staff will address those issues in either the immediate or long-term future.

Safe to say though that a 26% possession return in Chicago this coming Saturday would almost certainly be a recipe for disaster.

One thought on “Vancouver Whitecaps passing passeth all understanding”