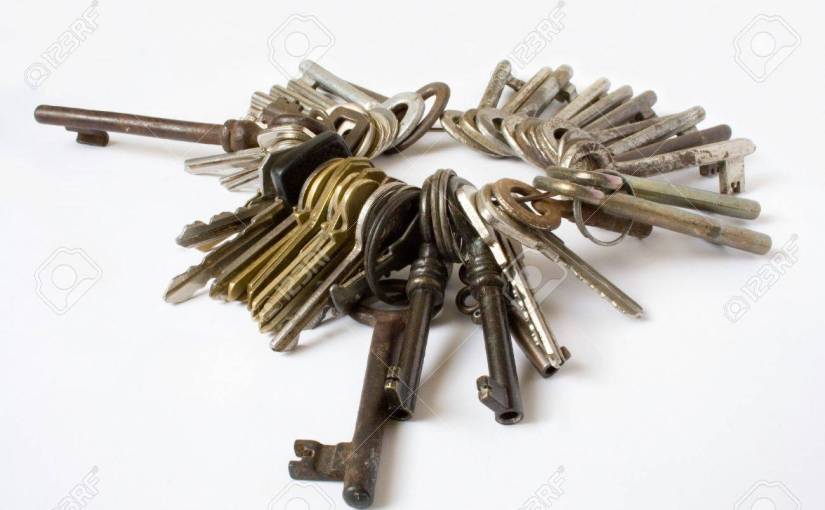 Is there any object we use so often but pay so little attention to than the humble key?

Fishing it out of pockets and carelessly twisting it in a lock with barely a thought for the import of such a thing.

But try to imagine being alive when the first key was produced?

Suddenly secrets could be kept from prying eyes but, because human beings are human beings, suddenly those secrets must have gained a greater fascination. What can be so special that it needs to be locked away? What treasure must that humble box contain?

And perhaps we can even judge a person by their attitude to keys?

For some they are an implement all about openings and for some they are the tool of closure. Some regard them as a hindrance, an annoying scrap of metal that just adds weight to the pocket or pocket-book and for others that weight is reassuring. A reminder of at least some connection with the world, jagged little mementoes forged through form and function.

Yet we may well be living through the death of the key as we know it.

Apps and swipe cards and fingerprints and irises are slowly becoming the tool of choice (our own DNA granting and denying us access at every turn).

But perhaps we really shouldn’t say that keys are slowly becoming obsolete? Perhaps we should just say they are evolving?

Perhaps the final turn of the final physical key will be to turn into us?

But do you know which keys will never go away? That’s right! The keys to the game.

So this is what the Vancouver Whitecaps have to do against Dallas at BC Place on Sunday afternoon.

Same again please- The Whitecaps may have lost against the Seattle Sounders but they played with a level of energy and intent rarely seen under Carl Robinson. If they play in the same way against Dallas they will get the crowd behind them once again and they will win.

And the return of Yordy Reyna won’t hurt either.

Defend- Or perhaps that should really be “concentrate” because Vancouver are mostly fine at the back except when one of them switches off. And one of them will always switch off.

That’s clearly a systemic issue rather than a series of random aberrations and it’s doubtful the coaching staff will be able to figure out why it’s happening before the end of the season if they haven’t done so already.

Get the best out of Alphonso Davies – Davies has been a match winner on more than one occasion this year but against the Sounders he was trying to force himself to be one.

Taking on one man too many, unnecessary stepovers and poor final decisions.

The return of Reyna should help distract Dallas from Davies but he needs to get back to the simplicity that’s worked so well for him this year.

The thing they can’t do- This isn’t going to happen but we can at least dream.

Under Carl Robinson the Whitecaps have almost never been able to play with a central midfielder who can also join the attack.

Pedro Morales came closest but his defensive frailties were laid too bare. Barry Robson could have been the man if he wasn’t Barry Robson (he was here under Rennie but I just like the line). Felipe was supposed to be the guy this year but ended up in the neither fish nor fowl position of being a defensive liability with little attacking threat and Jordon Mutch isn’t around often enough to count.

So we’re back to Ghazal and Teibert (which is the best pairing for this team) but it’s so frustrating to watch a side desperate for a goal and yet still have two central midfielders who are hesitant to leave the centre circle.

Oh well, the Dallas game is the most “must win” of all the “must win” games they’ve had thus far.

So they must win it.